Now I know this book was published in 2003, but I’m not an official Book Reviewer, so I’m reviewing this older gem. If you’re a chick lit fan that loves to engross yourself with the drama of Hollywood living and relationships, then Maneater is the book for you!

I absolutely love this novel by Gigi Levangie Grazer. It’s funny, entertaining, and insightful. Although I don’t find myself relating to any of the characters, I more than appreciate their humor and the crass language they use in the comfort of their friends. 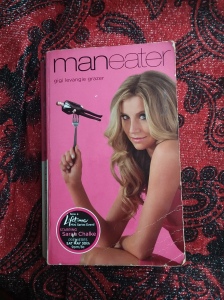 Maneater follows Clarissa Alpert, a soon-to-be twenty-nine (thirty-two) year old woman as she attempts to find a rich man in Hollywood to call her current husband. She navigates the waves of turmoil by consulting her Star Chamber, her closest friends, who always have either too honest advice or pleasant commentary.

I thoroughly enjoyed reading along as Clarissa lives a life of leisure provided to her by her womanizing father. She lives in a nice apartment, fully paid for by said father, dines at the best restaurants, and drives a flashy BMW convertible. She has no job because she created a career for herself as a pretty woman who snags a rich man to take care of her. And although I have absolutely nothing in common with Clarissa, I’ve always been a bit jealous of the women who never have to work a day in their lives because their profession is being cute and living off their current man’s money. This book made me realize that it’s nothing to be jealous about, so I feel much better!

She later realizes that her whole life she’s been groomed to rely on a rich man for her future as opposed to creating a future for herself. So after her mission of getting married is accomplished, and she’s suddenly poor, she begins to re-evaluate her life by declaring that she doesn’t need a man to take care of her. She even searches for a job! Gasp!

Overall, Maneater is a hilarious read with brilliant insight into the life all woman could have chosen for themselves. As it turns out, trying to find a rich husband to rely on is almost more work than establishing a career!

I give this book 5 STARS. Not only because it is funny and entertaining, but because Gigi Levangie Grazer somehow knows what’s in my head at all times. She gets bonus points for mentioning The Mummy, Brendan Fraser, Monopoly, Zodiac Signs (Clarissa is a Scorpio), and for calling her group of girls the Star Chamber. If you haven’t read anything by Gigi Levangie Grazer, I suggest you start soon!