On February 14, 2008, my life changed forever. My plan was to go to class, study in between periods, then go to a Stop Light party at the BlueGrays. I know this because I used to keep lists, and this one received an honorary spot in my college photo album. And I kept it because that list is an insane reminder that even when you try to plan your day, it can all change in an instant. Anyways, all seemed to be going well until I made the walk home for lunch. On this short trip, I just about collided with a man wearing a long coat, carrying a guitar case, and walking out of Reavis Hall and towards Cole Hall. I turned my head and looked at him after our near collision and thought “that guy is off.” Then I completely forgot that thought even occurred to me because I was about to enter a dramatic fight with an old friend. In fact, we made plans to shout it out over AIM later that day. And the fight was pretty entertaining too until she sent a message that said “I think there’s been a shooting at our school. At DuSable.”

I lived directly across from the campus, so I ran over to my window and opened the blinds to see chaos. The ambulances quickly moved the wounded from Cole Hall to the local hospitals. The police, some of who escorted students while others searched for the shooter, roamed the pathways through the campus. And the helicopters hovered around every building in DeKalb. To this day, I have issues when I hear helicopters. I’m not entirely sure why, but I always figured it was because there wasn’t much air traffic in DeKalb. We were too far away from an airport to hear any planes and helicopters had no reason to be in our area. The only sounds we heard were tornado sirens, police sirens, parties and freight trains. But never helicopters.

So I ran back to my computer and said  “I see it. I am glad you’re ok.” She responded with “I’m glad you are too.” Then we never spoke after that because she was a bitch. But in that brief moment in time, we weren’t just friends, we were family. We were sisters who couldn’t see each other because all of the buildings were on lockdown. We were siblings who couldn’t call our parents because the cell phone towers were flooded. We were friends who couldn’t understand how someone would open fire in a lecture hall on students who wanted nothing more than to finish the day so we could enjoy our Thirsty Thursday: Valentine’s Day Edition.

Instead, the helicopters hovered all night and through the remainder of the weekend. Agents in black suits drove around the campus, Men in Black style. News crews were spotted around every corner. Things were very strange for a few days. Some students returned to classes a week later. Many others dropped out because they no longer felt safe in DeKalb.

The first day back was silent. Students walked to class, but no one spoke to each other. And even though the outside world moved on, we remained in a somber state.

I noticed that something changed in us. At first, we were quiet, paralyzed, and afraid. But soon, that transformed into courage, determination, and gratitude. So many of those who were on campus that day have gone on to do amazing things. Some moved overseas to live in Luxembourg or Sweden, while others moved to different cities to become newscasters. Some have  made television appearances on Shark Tank for creating a product that provides safety to college students. And others have become light workers, performing spiritual healing and giving guidance while some went on to be musicians, writers, and explorers.

Something changed in all of us that day. It was like we somehow all decided that we wanted to do something with our lives. Maybe it was because we felt guilty that we were the ones who survived. Maybe it’s because we realized that something like that could happen, does happen, and could end our journey in an instant. Or maybe it’s because we feel that we have to live for those who would never get the chance to grow, change, and dream. I’m not sure. But I know that those five students, Ryanne Mace, Gayle Dubowski, Julianna Gehant, Catalina Garcia, and Daniel Paramenter will be in our lives and our hearts forever. 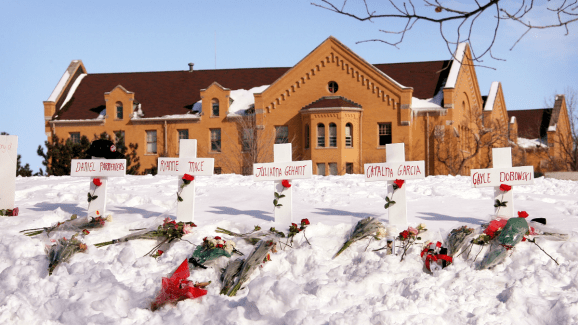 It’s been ten years since a gunman opened fire in Cole Hall, taking the lives of five students, then himself. It’s been a decade since anybody has probably even thought of this incident outside of those who were there that day. And even though school shootings are commonplace in the United States, each campus feels the impact in their own way. Maybe one day we can turn our rage into determination, our fear into hope, and our hate into love so that those who dare to dream have the opportunity to lead.

So to all of my peers at NIU, we will continue to achieve our dreams. To everyone else who has ever experienced an incident as wicked as this, I send love, condolences and my best wishes. They say everything happens for a reason, and even if that reason has never made any sense, we must remember that we are still here for a reason. We have been spared for a reason. And if we can’t find the courage to live for ourselves, then we must at least find the will to live for someone else.